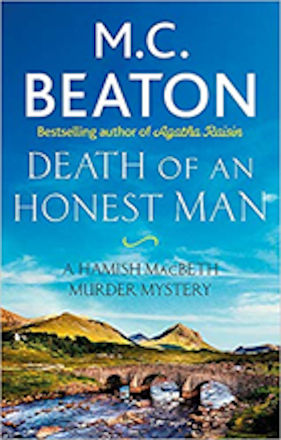 Death of An Honest Man

Nobody loves an honest man, or that was what police sergeant Hamish Macbeth tried to tell newcomer Paul English. Paul attended church in Lochdubh. He told the minister, Mr. Wellington, that his sermons were boring. He told tweedy Mrs. Wellington that she was too fat. Angela Brody was told her detective stories were pap for the masses and it was time she wrote literature instead. He accused Hamish of having dyed his fiery red hair. He told Jessie Currie – who repeated all the last words of her twin sister – that she needed psychiatric help. ‘I speak as I find,’ he bragged.  Voices saying, ‘I could kill that man,’ could be heard from Lochdubh to Cnothan.    And someone did.